You will, perhaps, complain as much of the frequency of my letters now, as you were wont to do of their rarity. I think this is the fourth within as many moons. I feel anxious to hear from you, even more than usual, because your last indicated that you were unwell. At present, I am on the invalid regimen myself. The Carnival–that is, the latter part of it, and sitting up late o’nights, had knocked me up a little. But it is over,–and it is now Lent, with all its abstinence and sacred music.

The mumming closed with a masked ball at the Fenice, where I went, as also to most of the ridottos, &c. &c.; and, though I did not dissipate much upon the whole, yet I find ‘the sword wearing out the scabbard,’ though I have but just turned the corner of twenty-nine.

I have lately had some news of litter_atoor_, as I heard the editor of the Monthly pronounce it once upon a time. I hear that W.W. has been publishing and responding to the attacks of the Quarterly, in the learned Perry’s Chronicle. I read his poesies last autumn, and, amongst them, found an epitaph on his bull-dog, and another on _myself_. But I beg leave to assure him (like the astrologer Partridge) that I am not only alive now, but was alive also at the time he wrote it. Hobhouse has (I hear, also) expectorated a letter against the Quarterly, addressed to me. I feel awkwardly situated between him and Gifford, both being my friends.

And this is your month of going to press–by the body of Diana! (a Venetian oath,) I feel as anxious–but not fearful for you–as if it were myself coming out in a work of humour, which would, you know, be the antipodes of all my previous publications. I don’t think you have any thing to dread but your own reputation. You must keep up to that. As you never showed me a line of your work, I do not even know your measure; but you must send me a copy by Murray forthwith, and then you shall hear what I think. I dare say you are in a pucker. Of all authors, you are the only really _modest_ one I ever met with,–which would sound oddly enough to those who recollect your morals when you were young–that is, when you were _extremely_ young–don’t mean to stigmatise you either with years or morality.

I believe I told you that the E.R. had attacked me, in an article on Coleridge (I have not seen it)–‘_Et tu_, Jeffrey?’–‘there is nothing but roguery in villanous man.’ But I absolve him of all attacks, present and future; for I think he had already pushed his clemency in my behoof to the utmost, and I shall always think well of him. I only wonder he did not begin before, as my domestic destruction was a fine opening for all the world, of which all who could did well to avail themselves.

If I live ten years longer, you will see, however, that it is not over with me–I don’t mean in literature, for that is nothing; and it may seem odd enough to say, I do not think it my vocation. But you will see that I shall do something or other–the times and fortune permitting–that, ‘like the cosmogony, or creation of the world, will puzzle the philosophers of all ages.’ But I doubt whether my constitution will hold out. I have, at intervals, ex_or_cised it most devilishly.

I have not yet fixed a time of return, but I think of the spring. I shall have been away a year in April next. You never mention Rogers, nor Hodgson, your clerical neighbour, who has lately got a living near you. Has he also got a child yet?–his desideratum, when I saw him last.

Pray let me hear from you, at your time and leisure, believing me ever and truly and affectionately, &c. 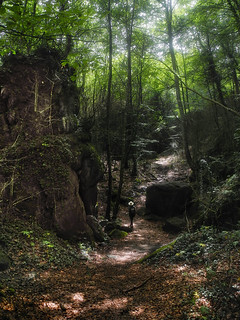